Do you like your name? By giving us unique names with odd spellings, our parents set us up for success, or a lifetime of mispronunciations and teasing.

We don’t have to worry about that so much when we name our dogs, but to make up for our parents’ mistake, we try to give them a strong and fitting name. Engrave your pup’s luxury dog collar with a name that represents who they are and what they mean to you.

Here are 20 dog names to whet your palette.

Benjen: Originated from the name Benjamin, meaning “son of the right hand.”

Bixby: An unusual name, only 27 people have been recorded to have the name Bixby in U.S. from 1880-2015. Though its meaning has been lost, the fact that people seldom use the name is enough to know that it’s unique.

Bolt: If your pup is a quick study and fast runner, Bolt can symbolize his intelligence and athleticism. And who doesn’t remember Disney’s title character of the same name?

Brinkley: Is your dog a looker? Maybe they’re fine-tuning their skills to become a successful show dog. If so, why not name them after the highly successful model Christie Brinkley?!

Cinder: Short for Cinderella, this French name is perfect for the dog who exudes grace, patience and kindness. Thinking about enlisting your new pup as a therapy dog? Name them Cinder!

Clay: Does your dog love to roll around in the mud? Do they love being outside in the open air? Give them a nature name to represent their free spirit.

Colt: Meaning “young horse,” this is a name for a larger than life dog, such as a Great Dane or Rhodesian Ridgeback.

Colette: Meaning “victory of the people,” is an inspiring name for the newly adopted pup in your life.

Cricket: Is your dog a noise maker? Do they find joy in the little things? Name the dog that brings your life happiness Cricket after the wondrous bugs that provide beautiful natural music during summer evenings.

Cy: Short form for Cyril meaning “Lordly,” this is the name of the number one dog in your life.

Dingo: Named for the Australian wild canine, Dingo would fit the personality of an independent pooch who doesn’t need to be smothered with attention to understand that he’s loved.

Dino: Named after the happy purple dog-like dinosaur who needs no reason to give his owner big slobbery kisses, Dino is the name of a pup who turns a gray sky blue.

Dobby: As any Harry Potter lover will know, Dobby is the name of the loyal house elf who (SPOILER) risked his life to save his friends. For the loyal and loving dog, Dobby is a name synonymous with fealty and heart. 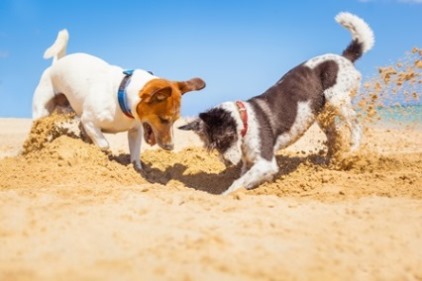 Leeto: Of Greek origin, Leeto means “hidden.” For the pup who loves to burrow under blankets and dig in the backyard, Leeto is the name for them.

Link: Who doesn’t know the green-capped, sword-wielding hero of Hyrule? Link is the name fit for the dog who would do anything to protect you.

Lizbeth: Of English origin, Lizbeth means “God is my oath.”

Luca: Of Italian origin, Luca means “person from Lucania, Italy. Proud of your Italian heritage? Carry on with tradition and give your dog a solid Italian name!

Have you discovered a name you like? Visit Hot Dog Collars to monogram your pup’s collar and new bed today!