Order before Dec. 12 to for arrival before Christmas. ❄️ 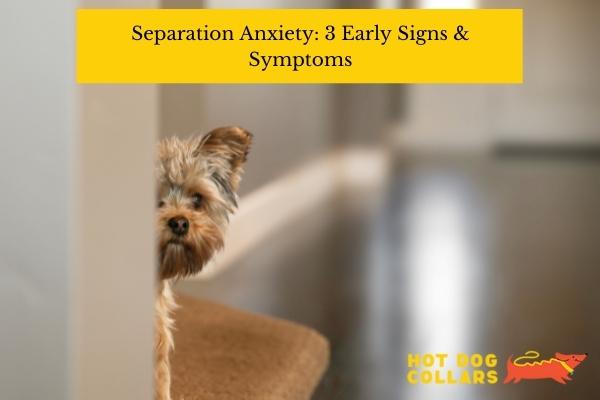 Whether it’s a new puppy or an adopted dog, the moment you introduce a dog into your life, you may have to look out for and address many behavioral, psychological, or physical issues. Unfortunately, one of these issues may present itself in the form of separation anxiety.

Separation anxiety (SA) is stress that causes a dog that’s over-attached or dependent on its owner from, you guessed it, you being separated from them. Whenever you’re not around them, their reaction to this stress can vary significantly. However, it leaves your pup feeling scared and alone to the point where they can start having what people refer to as panic attacks.

These episodes can be destructive, terrifying, and stressful for your pup and you as well.

So, what causes social anxiety? What are the early signs and how can you prevent this issue or properly address it? Read on to find out.

The ASPCA says that there is no conclusive answer to why certain dogs can develop separation anxiety while others don’t. However, professionals have noticed that SA appears far more in dogs that have been abandoned or adopted into new families from shelters than those kept by a single-family and bought at a young age.

From this, professionals have linked a couple of potential factors contributing to the development of separation anxiety. These factors include:

A recent study published from the University of Lincoln in England has linked four other main distresses as triggering separation anxiety in dogs. These include:

What are the Early Signs to Look out for?

When it comes to separation anxiety, Marvelous Dogs say it’s important to recognize the early symptoms to address the issue head-on before it gets worse.

Here’s a list of three of the most common early symptoms of separation anxiety.

If you notice that your otherwise well-trained pup is urinating and defecating all over your residence while you’re gone, this should cause some concern, especially if this goes outside the norm from how they act when you’re home.

Urination and defecation in the home should only present themselves as a sign of separation anxiety if you know that your pup wouldn’t urinate and defecate everywhere if you were home. If you have an untrained or undisciplined dog, this could simply be a normal instance of needed training that isn’t linked to any other issues.

Vocalizations such as barking and howling can be from pent-up frustration that your pup may be feeling due to you not being with them. Some dogs may bark or howl because of other things such as behavioral issues, boredom, or lack of proper training. However, these tendencies will usually only appear when you aren’t around them with SA.

Outside of barking and howling, other tendencies such as excessive pacing, usually in front of a door or window, can be an early sign of separation anxiety and usually accompanied by little, constant whines or whimperings. Pacing can be completely normal for some dogs and may not be linked to SA; however, if the pacing seems uncharacteristically frantic, SA may be the cause.

3. Destruction from Chewing or Digging

Destructive chewing and digging behaviors will only present themselves when you aren't in the house and will center around escape areas such as windows and doors. Destructive tendencies are some of the most dangerous early signs of separation anxiety, and they can commonly lead to self-harm, cuts, and damaged teeth and nails.

If your dog displays destructive behaviors even when you're present, it may be caused by a discipline issue or something else and not a sign of SA.

How do I Prevent and Address Separation Anxiety?

There is no way to prevent or stop your dog from having separation anxiety completely in most cases. However, some minor things you can do to relieve, address, and de-escalate reactions to SA include:

While these treatments may not completely "cure" your pup's SA, they can help transform the home into a safer and more relaxed environment or preoccupy them while you're gone, which can help reduce their stress, leading to a reduction in unwanted behavior.

How Should I React to my Pup’s Separation Anxiety Episodes?

What you shouldn't do is punish or harshly react to your dog because of their behavior. Your pup doesn’t mean to misbehave or destroy things on purpose; they’re just trying to respond to their distress in the only way they know how. Negatively reacting to their stress can make them even more distressed and untrustworthy of you, who they’re supposed to trust the most.

Be kind and patient and realize that they need love, attention, and care, not more stress! I guarantee that you will so more progress and results when you’re understanding and positive.

Separation anxiety can cause an array of problems for your pup and your home as well. Pups who suffer from this issue will usually show common signs such as urinating and defecation in the house; excessive barking, howling, and pacing; and destructive tendencies such as chewing and digging around escape areas when you aren’t present.

Please, address these issues early on before they become severe!

While you can’t completely get rid of separation anxiety, you can reduce its effect on your pup by introducing them to a basic routine, training, and coping mechanisms that can reduce anxiety and promote a safe, relaxing environment when you aren’t around.