Fun Facts About Papillon Dogs - My Little Dog, A Heartbeat At My Feet 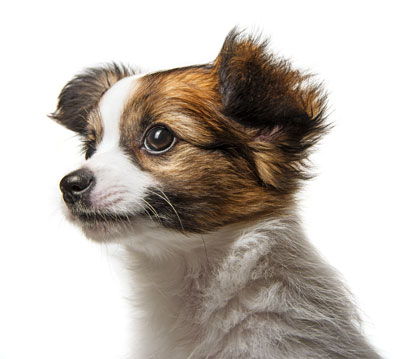 The Papillion dog is a small, adorable looking canine with distinctive ears. It is also called the butterfly dog because its large ears give it a butterfly appearance. The ears may stand erect or droop downwards. Papillion dogs that have downward ears are referred to as Phalene, but both ear types are registered as the same breed. The Papillion breed is also known as the Continental Toy Spaniel. The breed was descended from the miniature spaniel. The Papillion is one of the oldest dog breeds. The breed was first recognized by the American Kennel Club (AKC) in 1915.


The Papillion is a lively, active breed of dog that has a big personality and a small body. Papillions are typically 8 to 11 inches in height. Males weigh approximately 8 to 10 pounds, with females averaging 7 to 9 pounds. Papillions are fairly long lived, and their lifespan may average 15 to 16 years. This breed has a coat that is always partially white with patches of another color. The Papillion dog is generally clean and requires little grooming. It is best to brush the long, silky coat a couple of times each week to keep it from matting.


The Papillion breed is fairly easy to train, but housebreaking may sometimes be a bit difficult. Typically, these dogs are obedient, patient and gentle. They can become somewhat possessive of their owners, and it is important for the owner to be consistent with training. If the dog becomes possessive of its owner, it may experience separation anxiety when the person leaves. The Papillion is not generally an aggressive dog, but it does make a good watchdog. The breed is social and usually gets along well with other animals, such as cats. It is best to socialize the dog at an early age. 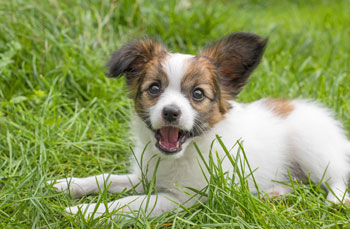 Papillions are friendly, affectionate and playful. They love to cuddle and generally are gentle with children. However, they may not be suited for households with very young children that aren’t old enough to know how to handle a pet. The dog may be injured around rambunctious children, or the dog may nip at the child in an attempt to get away.


Because of their small size and delicate bodies, Papillions are suitable for indoor living. However, these dogs enjoy the outdoors, and need daily walks. They are generally calm dogs, but they are also very energetic and intelligent. Papillion dogs need physical and mental stimulation to keep them from getting bored. Although this breed can live just fine in an apartment, the neighbors may not. The dog may interpret noise coming from other apartments as an intrusion and tend to bark often. However, the dog may adjust to outside sounds and do just fine. 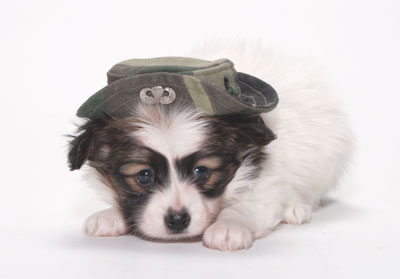 The Papillion dogs are generally healthy and are tougher than they look. However, like most breeds, they are prone to a few health conditions. The Papillion breed is prone to problems with the kneecaps of the hind legs. The kneecap may become dislocated and slip out of place. The problem is usually genetic, and the condition may range from mild to severe. They may also develop an eye condition known as progressive retinal atrophy. The condition eventually leads to blindness. There is no cure for progressive retinal atrophy. However, the condition is rare. Hypoglycemia, also known as low blood sugar, can be a problem for the breed. Left untreated, hypoglycemia can be fatal, but is easily treatable if caught in the early stages.


Papillion dogs also have a soft spot on the top of their heads, similar to the fontanel of a human infant. This condition sometimes corrects itself, but in the event that it does not, the dog’s head needs protected. Regular appointments with a veterinarian can help keep your Papillion healthy, and keep you aware of any potential health problems.


Have a Papillon? Have a bunch of them? Tell us about some interesting things they do by using the comments below or tweeting at us: @HotDogCollars

Don't forget to check out our special section of products just for small dogs!