You put on your shoes, grab your keys, and make your way to the door. Before you can even turn the knob, your dog appears. He begins whining, yipping, and frantically circling your feet. Your heart sinks, and your emotions waffle between frustration and guilt.

It's a common scene, played out in households across the world. Your dog, like thousands of others, is suffering from separation anxiety. It occurs when a dog experiences severe distress when separated from his guardian. He may bark, whine, howl, and use the bathroom inside. In the most severe cases, he may destroy furniture, doors, window treatments, and other household items. 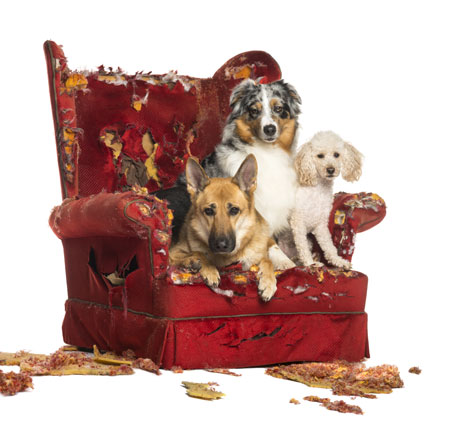 Separation anxiety is stressful for both dogs and their owners. Severe cases resulting in the destruction of property create household tension and may cause financial strain. Less severe cases aren't as traumatic but can still create chaos.

The good news is that most dogs can be successfully treated. It takes patience, but you can train your dog to handle separation from you. The amount of time it takes to for him to respond to training will depend on his personality and the severity of his anxiety.

A dog's temperament greatly influences whether or not he develops separation anxiety; it's seen less in relaxed, easy-going dogs than in their excitable, high-energy counterparts. Certain breeds, such as Dachshunds and Cocker Spaniels, seem to have a greater inclination towards separation anxiety, suggesting that it has a genetic component, and male dogs seem to suffer from it in greater numbers than females.

Some anecdotal evidence suggests that dogs adopted from animal shelters and purchased at pet stores are more likely to develop it than dogs adopted from families. This is probably the result of time spent in cages without enough human contact. This isn't a reason to avoid shelter animals. In fact, it makes it even more important to adopt them.

If a dog is accustomed to spending most of his time with his owner, he might experience separation anxiety if that changes. For example, some dogs become anxious when their kids return to school after summer break. This is normal and usually mild but sometimes morphs into a bigger problem.

Minor separation anxiety is relatively easy to treat. It may include your dog barking, howling, and panting, but not causing huge household disruption. He might chew up a few shoes, but he doesn't create major damage. It's more of an annoyance than a problem.

Severe separation anxiety takes longer to treat. If may include your dog urinating and defecating inside, barking and howling incessantly, and destroying household items. It causes a major upset.

You can probably resolve a mild case quickly by making a few tweaks to your daily routine.

Leave quickly and quietly. Don't reinforce his behavior by petting him, but give him a simple cue that lets him know you're coming back.

Desensitize him to your leaving routine. For example, pick up your keys, then place them on the kitchen table. Put on your shoes, then go sit outside with him. He'll learn that shoes and keys don't always mean you're leaving, and he'll become desensitized to those objects.

Don't pay attention to him for several minutes after arriving at home. If you're excited and animated when you walk in the door, he'll attach too much importance to your arrival. It's hard, but waiting just five or ten minutes before playing with him will help him separate from you more easily.

When you make coming and going a normal, uneventful part of the day, he'll stop feeling threatened by your absence.

Give your dog something that smells like you, such as the shirt you slept in the night before, while you're gone. Put it in his dog bed, and the scent will comfort him.

Take him on daily walks. They'll help with boredom and allow him to expend some energy. Sometimes a daily walk is all it takes to cure minor separation anxiety.

To treat a more severe case, do everything listed above as well as the following, more aggressive, steps.

Establish a safe zone. This is a place that allows you to limit the amount of destruction while helping him feel more secure. Put him in a room, with a window if possible, and give him lots of toys. Don't forget to leave something that smells like you.

If you have no other options, consider crating him, but be aware that this may make his anxiety worse. The small space combined with your absence may overwhelm him. However, some dogs do well with crates. It's up to you to determine if it's right for your dog.

Teach him to sit and stay. Once he learns, give him the commands then leave the room for a few minutes. Gradually lengthen the amount of time you're gone. This will help him remain calm and in control without you. Eventually, you can give him the commands when you leave the house, but it's not a quick process. It may take several weeks or even months.

It may take a while to treat your dog's separation anxiety. While you're training, there are ways to make life a little easier.

Over-the-counter and prescription supplements may help. Talk with your veterinarian about the best ones for your dog. They're not a great long-term solution, but they can help tremendously when you start training.

Many vets and kennels offer day care for dogs. The benefits are two-fold. Your dog learns socialization skills and your house is safe from destruction.

While tempting, some things won't help with separation anxiety and may even make it worse.

Punishing your dog won't help. He's not misbehaving because he's a bad dog. He's scared, and punishing him won't help him feel less afraid. In fact, it may intensify his fears.

Your dog is anxious about you leaving him. Getting another dog won't help him with that. If you're adopting a dog because you want another pet, go for it, but don't get one to help your dog with his anxiety.

If you try these suggestions and don't see improvement, contact a professional dog trainer. She can help you develop and implement personalized strategies for your dog.