It’s widely known that dogs see differently from humans. All dogs see color differently, and in general their visual acuity (ability to see clearly and distinguish detail) is worse than that of humans.

What’s not as widely known is how well dogs see at night. How does a dog’s vision at night compare to humans, and do dogs have night vision? 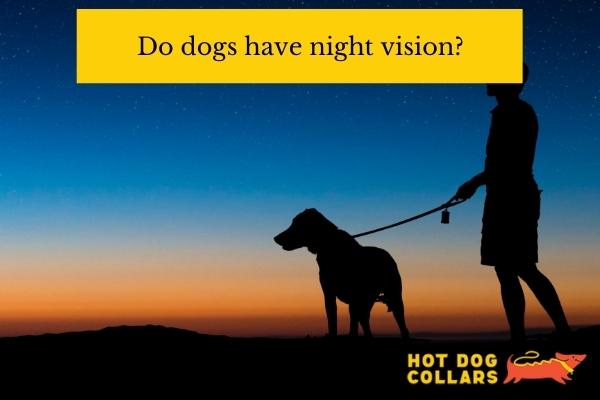 How Dogs See So Well at Night: More Light-Sensitive Cones

Both human eyes and dog eyes contain two types of photoreceptor cells in the retina: cones and rods. Cones are sensitive to color, while rods are sensitive to light and movement. It’s the rods that allow both dogs and humans to see in the dark.

It’s not known exactly how many rods are in a dog’s retina, but it’s clear that the dog eye has more rods than the human eye (which has approximately 120 million rods) based on their ability to see at night. With more rods, they are able to see objects and movement in low-light conditions better than humans can. Some theorize that this is an evolutionary holdover from when dogs needed to see at night to hunt and protect themselves from predators.

(Note that cones are exceptionally sensitive to light and movement but not at all to color. That along with the fact that dogs have approximately 1/5th of the amount of color-sensitive cones as humans do – approximately 1.2 million cones compared to humans’ 6 million – and have only two types of cones, compared to humans’ three, it means that dogs have significantly worse color vision than humans.)

The increased number of cones that dogs have is one reason they see so well in the dark, but it’s not the only reason.

How Dogs See So Well at Night: The Tapetum Lucidum

Have you ever seen the light hit your dog’s eyes in a way that makes them reflect back green? This phenomenon is called “eyeshine” and it’s due to something called the tapetum lucidum (from the Latin for “light-reflecting carpet”). It’s common in many animals, including cats, racoons, deer, and spiders. Humans don’t have a tapetum lucidum.

The tapetum lucidum is a thin layer of tissue that sits right behind the retina. It essentially acts as a mirror, catching and reflecting the light back onto the retina. This effectively allows the same light to be processed by the photoreceptors (rods and cones) twice.

The reflection and double processing of light due to the tapetum lucidum is important in helping dogs see better in low light, and it’s another reason dogs see better than humans do at night.

Just as human vision tends to get worse with age, so does dog vision. A number of medical conditions may be the underlying cause, including:

While healthy, younger dogs have superior night vision to humans, it isn’t guaranteed to last into old age. If you have an older dog, their eyesight may not be as good as it once was. As soon as you notice signs of vision loss in your dog such as bumping into things, go to the vet for a check-up. With many of the conditions listed above, early intervention leads to better outcomes. Also consider adding night lights around the house so they can always see where they’re going and motion-sensitive lights in the yard outside for nighttime potty breaks. This simple step will make your dog safer and more comfortable moving around at night.

Do Dogs Have Night Vision?

The short answer is yes, dogs see very well at night, at least compared to humans. A combination of a large number of light-sensitive rods in the retina and the reflective tapetum lucidum are two big factors in their excellent night vision.