Whether you’re new to dog ownership or are an experienced pupper parent, there are some “unique” behavioral traits you’ve come across. If you haven’t yet, just wait, it’s coming. 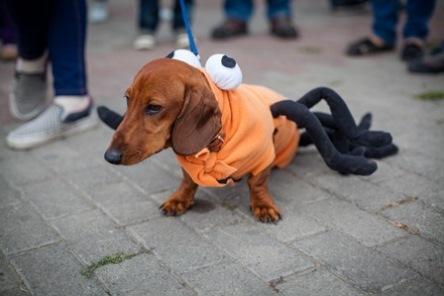 Like people, dogs have their own distinct personalities. There are dogs who absolutely love being dressed up in and have the receipts to prove it. There are dogs who get the ultimate rush jumping off a pier into the lake to fetch a ball. Then are dogs who would like nothing more than to cuddle up with you underneath a blanket.

Every dog is different, but there are a few shared quirks that owners have noticed. Have you noticed something about your dog that you find to be a little bizarre?

Here are the answers you’re looking for about your mutt’s habits.

Q 1: Why does my dog try to make eye contact with me when he goes to relieve himself?

A: Your dog looks at you during potty time because he is looking for you to warn him should a predator attempt to attack him while he is at his most vulnerable. IHeartDogs writes that because you are part of your pup’s pack, he expects that you will defend him, should the need arise.

He’s not staring you down in an attempt to embarrass you!

Q 2: My dog gets super anxious during thunder storms and at the Fourth of July. Is this normal?

A: Yes! Found to be most common in dogs with degrees of separation anxiety, you can help your pup by outfitting him in a Thundershirt and cuddling him through the storm.

A: Also known as whirling, Wonderopolis notes that tail chasing “is a natural behavior often seen among different species of predators. Some experts believe that tail chasing is simply a form of play that young predators engage in when they have free time. Unlike prey animals, predators don’t constantly worry about being eaten by other animals, so they have time to play.” 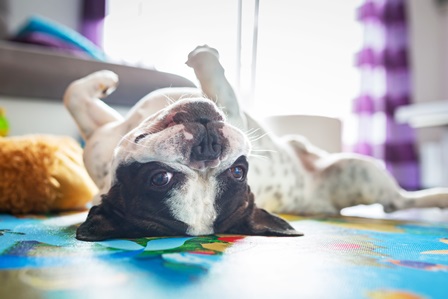 Q 4: Why does my dog lie on his back in front of other dogs?

A: Your pupper lies on his back when he meets new dogs in an effort to demonstrate to them that they have nothing to fear from him. Lying on their backs in front of new dogs is an act of pacification, letting the other dog know they mean no trouble.

A: CBS News reports that “in normal animals, brain activity during sleep is similar to that of an awake, alert state. The only difference is that large muscle movement…is inhibited.” Your dog is pantomiming running in her sleep because she is in the R.E.M sleep stage: she’s dreaming she’s running!

You do it too! How many times have you woken yourself up from a dead sleep because of your sleep talking? It’s not so unusual!

Your dog’s eccentricities are what makes them unique. Complement their precociousness with accessories from Hot Dog Collars!